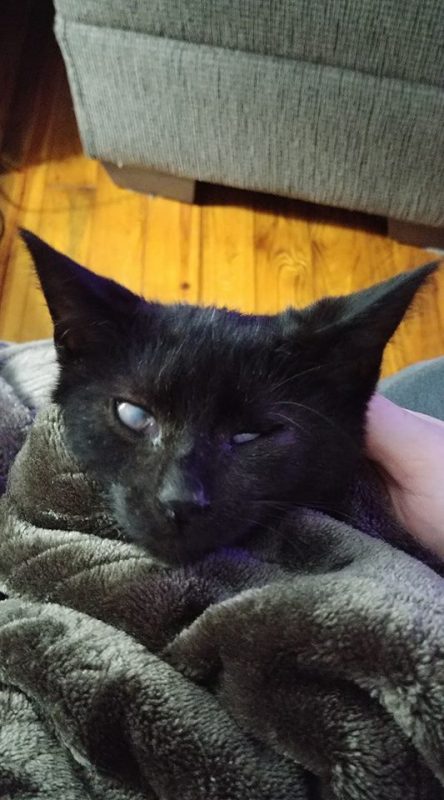 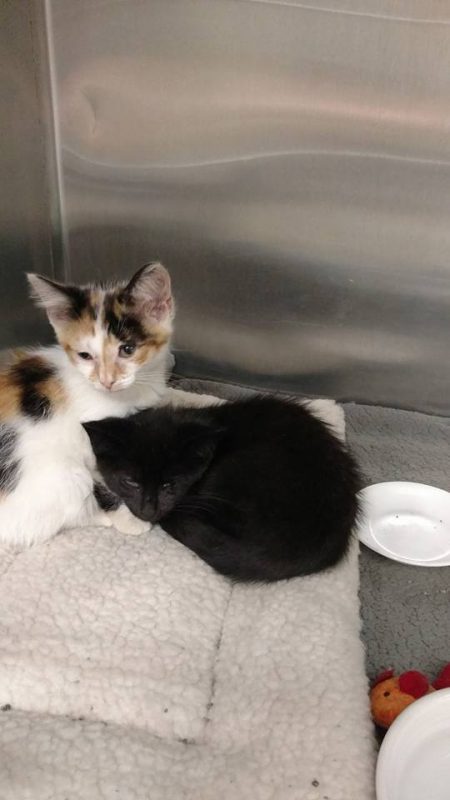 Bart was abandoned at a local veterinary clinic after a good samaritan rescued him and his sibling (the calico pictured above) who both had horribly brutal upper respiratory infections (eyes caked shut, severe nasal discharge, congestion) — Bart’s sister slowly improved but Bart did not. Bart came to the clinic with a broken back leg (the veterinarian suspected something had tried to catch Bart as prey), a hernia and his left eye had ruptured most likely due to having feline herpesvirus.

Feline Viral Rhinotracheitis (FVR) is an infectious disease caused by the feline herpesvirus type-1. Typical symptoms of FVR involve the nose, throat and eyes, sneezing, nasal congestion, inflammation of the tissues that line the eyelids and surround the eyes, discharge from the eyes and nose. The herpesvirus can also cause keratitis, or swelling/infection of the cornea that leads to corneal ulcers. Rare cases include the rupture of the cornea, which unfortunately happened due to the herpesvirus in Bart’s situation.

Bart came to our home and was absolutely terrified. He bordered on the “feral” in which he spent the first month at our home cowering under our bed refusing to come out and hated being handled and held by anyone. It was assumed that Bart would be a “cellar dweller” but at least he had a roof over his head and food in his tiny belly.

By December, 2017 Bart had his left eye (what was left of it) removed, his hernia repaired as well as neutered. Upon waking up from surgery he purred for the very first time– a milestone that made his new parents gush with pride (and possibly a few happy tears!). By spring of 2017 Bart realized he needed to make up for lost time while he was sick as a baby and became an ornery, rambunctious kitten!

Bart still has vision issues (he suffered a corneal ulcer on his right eye as well, luckily it did not rupture and he has some limited vision in it) as well as a habitual “booger nose” and suffers from the occasional flare-ups caused by the herpesvirus but today is a happy, functioning, handsome man!

Bart would have sadly been overlooked in a shelter setting (or even more devastating– euthanized) because of his “special needs” coupled with the fact that he is a black cat to which statistically sit in shelters longer than any other type of cat. By giving this handsome fella a chance the world was able to see what a spunky, resilient kitten he is! Despite almost becoming someone’s snack while in the wild he has made a complete turn around and rules the house! Bart is a typical cat who cuddles, plays and gets into mischief!

Do you have a cat that suffers from herpesvirus? How do you accommodate your home for your special baby?